Do you know how NaCl (Sodium Chloride) is Important for our lives?

What is Sodium Chloride?

Sodium Chloride (NaCl) is mostly known as the Table Salt we consume every day in our meals. The substance is the most essential compound in the human body [1] and performs the following main functions:

What are the Side Effects of Excessive Sodium Chloride Intake?

While very important to the human body, Sodium Chloride taken in excess can also have very serious side effects, such as higher blood pressure and swelling. The United States Department of Health and Human Services recommends that individuals consume no more than 1500–2300 mg of Sodium (3750–5750 mg of salt) per day depending on age [2] . Meanwhile, the actual average Sodium intake in the U.S. is much higher. Fig 2-13 demonstrates a comparison of the recommended Sodium Intake (1500 mg-2300 mg) in relation to the actual daily average intake in the U.S. 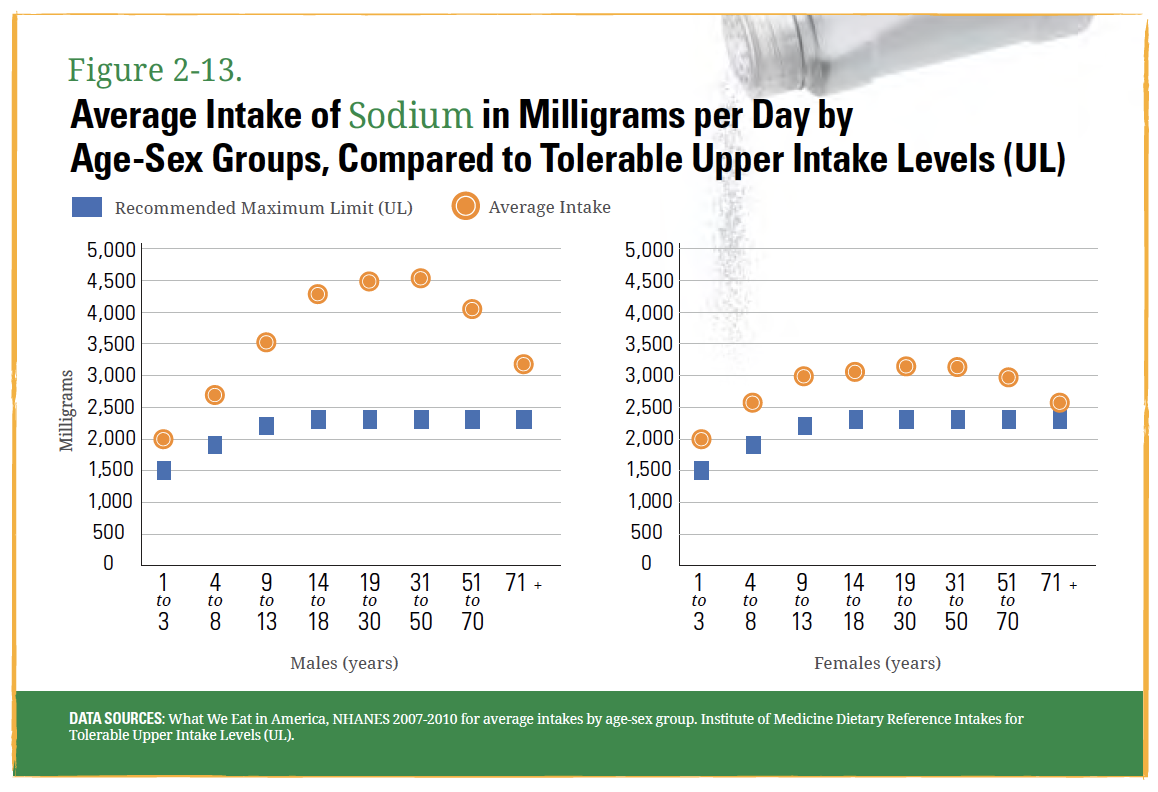 There is a very remarkable excess of average intake compared to the United States Department of Health and Human Services and doctors’ recommendations for all groups, especially for males. This results in the increased risk for heart attacks and strokes for the entire population.

What has been done to Reduce Sodium Chloride Intake in the U.S.?

In January 2010, the National Salt Reduction Initiative (NSRI) was launched with the aim of reducing sodium chloride in the food supply by 25 percent in five years and simultaneously reducing population sodium intake by 20 percent, thereby reducing the risk for heart attacks and strokes. Twenty-one companies met their 2012 NSRI commitment. A realization of the initiative by major companies is shown on Fig.2-14.

There were two known methods of salt quantity reduction in foods: first was a simple cut of added salts, and the second was the partial substitute of salt with an unsalted substance. [6] These Sodium Chloride quantity reductions in foods didn’t lead to the expected results; according to recent publications, average Sodium intake is still high and close to the values we had almost 10 years ago. What is the reason for this problem?

This problem could be explained by the phenomenon known as “Human Salt Addiction”. Scientists from the Florey Institute of Neuroscience and Mental Health (Australia) have identified exactly where in the brain the salt cravings originate, as well as the mechanism at play. “Turns out” there is a scientific explanation for salt cravings: it's all down to your brain being wired to seek out salt, even if your body doesn't need it. [7]

For example, if a “salt addicted” person is used to consuming products with elevated salinity. If they are served a product with lower salinity, they will add salt and elevate the product salinity to their craving level. A habitual increased salinity craving is the main mental drive of salt addicted people, and leads to an increase of Sodium Chloride Intake.

How to Reduce Sodium Chloride Content in Foods and Overcome the “Human Salt Addiction” Phenomenon?

We suggested a new idea [8] for how to reduce Sodium in foods and overcome the “Human Salt Addiction “phenomenon. The idea proposes a food containing a low Sodium source without sacrificing the salinity taste. The food with lower sodium still tastes salty enough for a “salt addicted” person.

What Kind of Salts Are Better for Reduction of Sodium Intake?

The salts comparison shows that Sea Salt isn’t chemically refined and should contain more minerals and natural substances. The other advantage of Sea Salt is the absence of various impurities that occur in Rock Salt during the chemical refinement process. Sea Salt contains a lower content of Sodium Chloride compared to Rock Salt. Consequently, Sea Salt is better for your health.

Various kinds of Sea Salts were investigated to find out the healthiest products. The original certified, organic healthy Sea Salts with a lower concentration of sodium chloride (85-95%) were selected. These salts, harvested from the ecologically protected lagoons on the Pacific Coast of Mexico and manually produced according to ancient technology, contain well below the FDA allowable levels for microplastics and/or other poisonous substances.

Despite a lower sodium chloride concentration, the Sea Salt with 85% NaCl possesses a very strong, salty flavor compared to regular salts (97-99% of Sodium Chloride). This provides a reduction of sodium intake (it is very important for a health of “Salt Addicted” people), and leads to lower fluid retention. As a result, this salt helps with decreasing blood pressure and swelling. These organic sea salts were used as the basic substances for the creation of new generation revolutionary, healthy sea salts (czarsalt.com).

Posts about this salt, infused with natural healthy additives will be coming soon.